This was a daring thought because we had always assumed that the 1.4 million colours you can generate with a 8 bits or red, green and blue were more than enough. Yet, here we were, staring at a screen of grey, where the top half was just one bit different from the lower half (127 vs 128 in an red, green, blue colour space ranging from 16 to 235 if you like techie), and we could see the join. 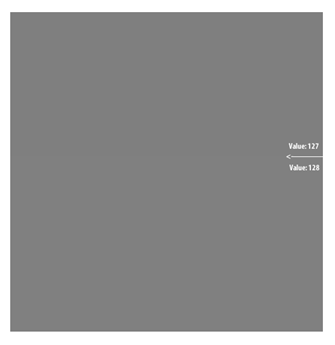 Have a look at the image, you may be able to see the effect. In fact our eyes love edges so much that they actually enhance it for you, so you may see the upper half getting darker as it approaches the join.

Run forward 10 years or so and my wife and I are in the demo room of an expensive television shop checking out plasma screens. We were using the opening sequence from the first Harry Potter DVD as a test source. As the camera pans down from the inky dark blue of the starry, starry, sky, a single street lamp becomes visible, and there was that darn shimmering again. This time great curved bands of lighter blues were sweeping over the screen and it looked, well,  horrible, however good the plasma screen. This time the 1 bit difference was being enhanced by some horrible video compression, and even less values colour values, used to cram the movie onto the DVD.

Roll forward another 10 years or so and we now have HD resolution and Blu-ray Discs, 5 times the number of pixels we had back in the late ‘80s, and faster (or slower) frame rates, we even have 3D, but we’ve still got a limited colour palette that Van Gogh would have turned his nose up at.  What we need is more colours; a higher dynamic range.

What is changing now is that we are starting to see cameras which can capture in a high dynamic range (HDR), meaning they can capture more colour information than we routinely use and display. This can mean more colours in-between the colours we already had, and/or more colours at the upper and lower ends than we had.

These cameras are causing a lot of excitement in filmmaking because they offer the opportunity to capture more detail from the dark and bright areas of an image. These would normally represent ‘under’ or ‘over’ exposure and would contain little or no image information. That means if you want to change the image to show someone hiding in the shadows, or the clouds in a bright sky, you can’t, you’re stuffed, forget it. Shoot it again and get a new gaffer to light it properly this time.

Here, for example, are two night time shots of The Jefferson National Expansion Memorial, St Louis by Kevin McCoy, one exposed to show the memorial and one to show the surrounding buildings.

You can see that there is image detail in one that is completely missing in the other. Now, if you are able to capture an image which has all the detail, you can choose which to display, or even do some magical tone mapping to show it all. A kind of ‘have your Chocolate Frog and eat it’ wizardry.

There are products which can manipulate such HDR images, in fact images with a near infinite range of colours. These were developed originally for the computer animation industry which has been able to render HDR images for ages. So we can capture HDR images, we can process them, but what about viewing them? Unfortunately that wonderful Blu-ray and plasma / LCD technology you have is all designed around the same un-Gogh-like colour palette.

Actually, there is a solution, and one that my good friend and colleague of the time, Duncan MacLean, discovered and demonstrated to us back in 1989. Noise. All you have to do is add just a little bit of noise (I remember he found 0.5% would do) to the values of the pixels and all that horrid banding just goes away. Audio engineers have known about the phenomenon for a long time. It turns out our senses deal with noise so that what we perceive is beautifully smooth.

This week The Economist had an article on Quantum-dot displays which may well be able to deliver HDR colours in our living rooms. The Blu-ray format could allow for deeper colour space too. So, you never know, one day, finally, I may be able to see all the colours in Van Gogh’s palette on my screen. Though judging by the speed of adoption of new technologies in the television industry, by the time it arrives, my eyes will have faded…