Profits have been under pressure for many years and that is reflected in the consolidation that we are seeing. IBIS World believe there were 1,789 establishments in 2010 earning a total of $4,276m, or an average of $2.3m each. That has risen from $1.8m per establishment in 2000 and they forecast will rise again to $3.4m in 2016.

There are a few things that jump out about those figures. Firstly that the industry is really small. Just looking at the other basket cases in the report, ‘DVD, Game and Video Rental’ is nearly twice the size of post-production. Despite the fact that almost every one of the 307m inhabitants of the US enjoy the fruits of this industry every day, they are spending only 13 bucks and 3 quarters a year each on the industry’s efforts.

The second thing that jumps out at me is how small most of these establishments must be. I know there are some mammoth ones out there like Technicolor (who by the way talked about “improved conditions in postproduction” in their 2010 annual report), but the majority must have just a handful or so of employees. In a separate report IBIS World state that there are 20,000 employees in the industry, which suggests a revenue per employee rate of just $200,000 per annum. If you were wondering what that meant you could compare it to Google’s rate of $1.2m per employee. Does that sound high? Well the top 50 Fortune-500 companies all have revenues of over $2m per employee.

The report states: “Video Postproduction is the second notable information industry that is exhibiting steep declines. Technological advances, particularly involving the widespread adoption of digital media have adversely affected the industry’s range of services, from editing and animation to archiving and format transfer. While the use of this technology is becoming widespread, it is undercutting the industry’s services since production companies can now do much of the work in-house.”

Actually, what I think is happening, is that there is a long overdue consolidation of roles in the industry and an associated de-skilling. For many years each employee would have a particular role and would complete only tasks assigned to that role. The role was part of a hierarchy in the industry and so in order to maintain their position on the ladder an editor, for example, might refuse to put a video tape into a tape machine, because that was the job of the a machine room technician. This created huge inefficiencies, but because many of the roles were very highly skilled, and there were plenty of profits, it was hard to challenge the status quo.

The Kids are Alright 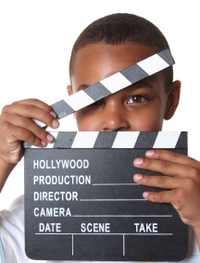 Now, a kid fresh out of college, can shoot digitally, edit, add special effects and polish the audio, on a laptop with software costing just a few hundred dollars. Suddenly we can see that the Emperor really doesn’t have any clothes, and he’s a bit embarrassed. The result may be a work of art, or it might be a dog’s dinner, but that is nothing to do with the skill required to throw a few clips together, it has everything to do with kid’s ability to tell a story.

There will be plenty of those kids too. In the UK in 2009, The UK Film Council reported in their Statistical Yearbook, 25,556 people employed in Film and Video Production (which in this case includes post-production) of whom 60% are self-employed (and therefore possibly not in full time employment). Compare that to information from the Higher Education Statistics Agency that in the academic year 2009/10 there were 27,705 students studying ‘Media Studies’ and a further 17,465 studying ‘Cinematics and Photography’. That 45,000 does not include those studying ‘Mass communication’, ‘Publishing’, ‘Journalism’ or a host of other related disciplines, nor is such a degree the only route into the industry.

I love being able to contribute in a small way to helping highly skilled and creative people tell amazing stories. This is a fun industry to work in, with energetic and exciting people. But, things are changing, the old order is passing, and the whole industry is going to have to adapt to change. We cannot fall back on ‘accepted practices’ or ‘the way things are done’, because if we don’t, someone else will be making content, and we’ll just be watching it. We can engage with that change, we can embrace the creative possibilities that it offers, we can push the boundaries again as the early pioneers of film did 100 years ago. If we don’t, the kids will, and the rest of the industry is having to grow up very quickly.

Are you thinking what I’m thinking?