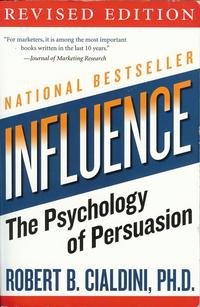 Now, finally, having read “Influence: The Psychology of Persuasion” by Robert B. Cialdini, (Harper 1984) I know what tricks they are playing, why we’re likely to be taken in by them, and most importantly, how to defend against them.

Never again will the power company sell me a lemon of a contract, it is peaches only for me from now on.

Cialdini’s idea was simple: to look at the techniques that people who seek to influence us use. What are they and how do they work? To research the book he went on sales training courses, attended pitches and talked to the most successful sales people he could find. He categorizes and describes the techniques, then explains the psychology behind them and what we can do to arm ourselves against them. He has six categories; Reciprocation, Commitment and Consistency, Social Proof, Liking, Authority and Scarcity.

Having received something, we feel compelled to try to repay in kind. A pleasant social custom that helps ease the interaction between people? Yes, but also a way to make you disposed to accept a proposition. Just think of the number of  times you are offered refreshment before discussing a deal, or are offered one free service such as a free boiler safety check which is really just a ploy to engage reciprocity in getting you to buy a new boiler.

Be aware that you don’t actually have to receive anything to be fooled by reciprocity, the other person just has to appear to have given you something. One example in the book is the ‘rejection-then-retreat’ method where the salesman offers you  something very expensive, then when you reject it (as he knew you would), he says “oh, well, if you are sure, what about the (the slightly less expensive option) then?”. They gave up the first offer, so that you would feel compelled to take the second.

Here the trick is to harness our inherent desire to remain consistent in our actions. This makes it very difficult for us to back out of a commitment, however small, once we have entered into it.

Consistency is rightly valued as a human trait. We can’t deal sensibly with people who are inconsistent, we consider them to be deceitful, two-face or mentally unwell. Often the commitment is subtle and easily entered into: someone asks you to help with a survey, or for your opinion.

I’ve written about this before in “You’ll never challenge your commitment”.

Another of our nifty little shortcuts which we use to avoid thinking too much is to do what everyone else does. Now as a certified iconoclast, refusenik and general awkward person, I find it very difficult to accept that I would ever do something simply because the people around me are doing it, after all I pride myself in doing the opposite.

Yet there is good reason to trust Social Proof in some situations. If you are in a crowd that starts to run in a particular direction, it would seem sensible to assume that they are running away from something and that you should do so too.

Social Proof can be falsified though; canned laughter is one of Cialdini’s favourite examples. It can work against us when it is ‘pluralist ignorance phenomenon’ when, for example, everyone else’s inaction at the scene of a crime, or accident, fools us into acting as though there is no problem.

It is not very surprising that we are more likely to accede to a request if we know and like the person making that request. So a ‘compliance professional’ will seek to establish some link with you; they play the same sport, they go to the same club, they drive the same car or have children at the same school.

An associated activity is giving compliments. We are, of course, pre-disposed to like someone who says something nice about us. In the showroom my hackles go up when they open the door for me…

Virgil encouraged us to “Follow an expert” and by and large we do … without thinking. In fact we’ll follow anyone who even remotely looks like an authority figure, even those who have only played them as fictional characters on television.

Someone who wears the uniform (even if only a lab coat) and carries the trappings of authority is likely to be able to get you to comply before you even realise what you are doing.

Finally, our compulsive acquisition of the scarce. Whether it is a misprinted banknote, or one of the “last few” in the shop, we want it. Scarcity also applies to what is denied us. Any parent knows that a child who is prevented from having something will do almost anything to get it, whereas if they are given free choice, they may never want the item at all. So perhaps my contrary nature comes more from being a third child rather than an awkward one?

The power of these techniques should not be underestimated. They work on our psyche at such a fundamental level that we find ourselves going along with something without ever having taken an active decision to do so. In Cialdini’s words this is the whir, click as our automated primitive responses step in and take control.

Anyone who is interested in sales, marketing, or in protecting themselves from the wiles of skilled ‘compliance professionals’ should read this book. My wife should definitely read it!

“Pants 2 You” is a poor customer message

The Secret of Good Marketing? Give Something Back!