“Apple products do the same. My iPod Touch broke 2 days after warranty expired =/ as did my Macbook which did on the last day of warranty… hmm”

“I had a Sony 400 disk DVD changer that failed ONE DAY after the warranty expired. I will never buy Sony again.”

“I don’t know about Sony, but I was thinking this very same thing about Panasonic. Especially their DVD players and TVs. Anyway, every Panasonic product I have ever had has broke right after the warranty ran out.”

Let’s be clear here, I’m not suggesting that there is any truth in the myth at all, but I do think it is interesting that some members of the public do. Electronics are going to fail, sometimes early, sometimes late. In fact, folks in reliability engineering call the typical failure rate the “Bathtub curve” which is a summation failures caused by parts failing early through defects, parts wearing out after a long period of time and some failing randomly at a constant rate. So, ship enough product and it is inevitable that some are going to fail on the day that the warranty runs out.

What I think is strange is that customers should jump to the conclusion that this is in some way planned. You would have thought that Early Adopters would have a finely honed sense that manufacturers struggle to bring products to market at all. Most technology companies struggle to deliver product which:

b)      continues to perform that function for more than 5 minutes.

It is not because these guys aren’t smart, quite the contrary, they are often so smart that they’ve dreamt up functionality that no one has ever dreamed of before, and one day soon, when they’ve got it to work, they’ll dream up a reason why someone would want it.

I’d like to propose a different reason for the “kill switch” myth a more human and more realistic one; hurt. A sense of being cheated, that the manufacturer has not delivered fairly on their side of the bargain that the consumer entered into when they choose to buy their product: “I invested my trust in you and you cheated me”.

This is important to all of us in technology product management because we have to manage our relationship with our early adopters with care and understanding. So let’s deepen our understanding of what is going on here with a little curve-ology in the Early Adopter Gullibility Curve. 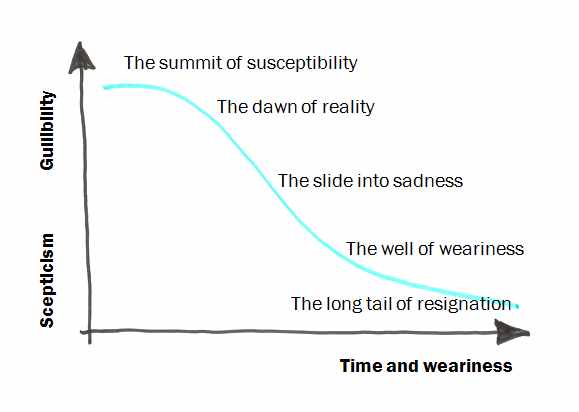 (You can tell I’ve been through this cycle a few times myself, can’t you?)

Like the Chasm, this curve can be interrupted, particularly if the adopter has too much money and free time, but like all self-correcting systems, that problem will be adjusted as the cycle continues…

The Joy of Product Manuals

The Secret of Good Marketing? Give Something Back!

“Pants 2 You” is a poor customer message