What’s in a Name?

You would have thought that the basic necessity of ensuring that the name is available would be something that a big company would get right. Not so. In one company we had a 3D animation product which we were preparing for end-of-life when we were contacted by Adobe. Would we, they wondered, be prepared to sell us the trademark for the product which we had registered in the UK? Well, it did not have much value to us, so we thought of the biggest number we could imagine (not very as we only had 10 employees at the time), doubled it, and offered that to them. They accepted without flinching. Damn! We thought; should have been 10 times. The trademark? “Acrobat”.

A few years later I was running 2d3 and we were bringing a revolutionary new product to market. It generated camera and point positions from footage shot from a movie camera. I had the idea to call it “Imagen” (as in image and generator and with the secondary benefit of being like a girl’s name – a nice counterpoint to the techie image of software products). Aware that I had to be careful, I wrote to my Japanese distributor to check that it would be ok. “Chris-san” he replied, “please don’t use this name as in Japanese it means ugly vegetable and is an insult for a young girl”. Double damn!

Such a minefield is this that you can understand why car manufacturers give up entirely and go for numbers instead of names. Still, I bet Citroen did not check what the cultural meaning of “C5” was in the UK before they launched their car. For those of you in other countries, mention “C5” to someone on these shores and they immediately think of this. 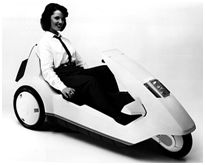 It has since become a byword for a loony product designed by a very intelligent person who appears to have failed to do the most basic market research (sitting in a large plastic bucket on a busy road; users were scared silly in traffic).

So, with some nervousness I thought I better check out my idea for a name. I’d discovered that “effectivus” was a Latin adjective meaning “creative, involving product; of practical implementation; effective/productive”. Perfect I thought. Still, better check with someone who knows, so I emailed my sons’ Classics teacher; “Effectivus is, as I suspected, a rare adjective not cited before the 5th century A.D. It does have the ring of dog Latin, which can of course be amusing, as in the Life of Brian.”

What Does Your Product Really Do?

The Joy of Product Manuals

Rotten to the core?

The Secret of Good Marketing? Give Something Back!
Tagsgo to marketideasproduct
PreviousPrevious post:Competitive Edge
NextNext post:Shine Your Shoes? Go Barefoot!