Within hours of Steve’s sermon to the faithful, Stu Maschwitz had posted an article on his blog with a mock up of an iPad being used to control a colour grading application. 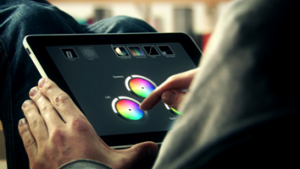 Now some of you may not be aware of it but it turns out that a keyboard and a mouse are not the ideal devices for all interaction with a computer. Sometimes a tablet will work, but you still have the awkward dislocation between screen and tablet, and the need for two devices. Nope, for lots of applications you need lots of knobs, buttons, joysticks, toggles, sliders and faders. Particularly in the professional film and television production market there has been a long recognised need for specialist desks of controls and displays.

So, here is the iPad, a relatively cheap, simple touch screen, with built in smarts and communications ports. It could be programmed to control a bunch of audio sliders, the next moment manipulating images, then on to reviewing and commenting on footage. Not only could you carry about your own personal, handy, UI to a large number of devices and applications, manufacturers could build them into those devices as universal control panels.

And that, for all those manufacturers of the amazing hardware control panels, is the world changing moment. If this happens, your multi-million dollar industry gets replaced by a few $10 iPad apps. Ooops.

Of course, and this is the rub, for this to happen the touch screen has to be fabulous. You need to be able to find your way around it just by touch, you need to be able to feel what you are doing, it needs to be responsive, elegant, intuitive and just plain lovely to use. Does the iPad deliver on that? I don’t know, but I suspect not, unless it has some very clever haptic (tactile) feedback stuff built in. Still, the writing is on the wall is it not?

There is a hole in my product