What struck me is the idea of thinking about product features and benefits in a similar way. If you’ve read Christensen you can think back to his ideas of the notion of product performance being “Good Enough” and “Not Good Enough”. When it is good enough, the next level becomes important, and further improvement may have no impact. 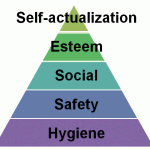 I’m proposing that for a product you can categorise the features into five simple groups which have the same hierarchical relationship as Maslow’s Needs. I am going to use “features” here rather than “benefits” because, frankly, although we all know that the important thing as far as the user is concerned is what benefit a feature is; we still always talk about feature roadmaps, feature creep, and bugs that are “features” (one user was kind enough to describe a feature in one of my software products as “mondo non-optimal”).

Like Maslow I’ve put the life threatening features at the bottom of my stack. These “Hygiene” features must be satisfied; the product must not decapitate you, it must not erase your data, it must not destroy your business or do you long term harm. Fail to satisfy this level of the hierarchy and you’ll probably end up in jail. Customers are unlikely to bother to check these unless there is obvious danger. Surprisingly large numbers of products turn out to fail at this first step. 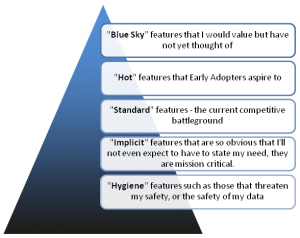 Next up the hierarchy are “Implicit” features which your customers will expect the product to have without even asking. These features are implicit in the product category; all cars can transport people, all pens can write on most paper, all DVDs should play in all DVD players (right?). If the customer discovers that the product fails at this level they’re unlikely to sue you, but are likely to return the product, be hugely frustrated, and rubbish your brand to their friends.

The Hygiene and Implicit features are like Maslow’s in that your product will fail in the user’s eyes without them, but they won’t motivate customers to buy the product either; they just have to be “Good Enough”.

In the middle of the hierarchy are those “Standard” features which customers probably spend most of their time thinking about. These are the majority of features listed in the product comparison charts. How much, how big, how fast, number of cup holders, fancy stripe down the side, etc, etc. These are the features that we sweat the details on to try to make sure that our product stacks up better against the competition than anyone else’s.

Next up are the “Hot” features which the Early Adopters will be worrying about. These are emerging features which may eventually hit the mainstream and which the Early Adopter understands they have to pay a premium for. Does it support the next wave of technology? Has it got that fancy new type of screen? Does it support that new standard (which hasn’t been fixed or ratified yet)?

Perhaps surprisingly I don’t think that that is the top of the hierarchy. Above the “Hot” features are the “Blue Sky” features. These are ones we just don’t know about yet. We don’t know what they are going to be or what benefits they are going to offer, but part of role in creating “Really New Products” is to go out into the unknown and find them. You know when you’ve got a “Blue Sky” feature because when you show it to people they won’t believe you, then their mouths drop open and they do a funny goldfish impersonation. You’ve just reconstructed their whole model for what that particular category of product is, and for all you know you’ve just told them they’re going to lose their job just as soon as their boss sees this…

We can push the model a little further and see an increase in value of the features as they rise up the hierarchy. I’ve already suggested that Hygiene and Implicit features might have a negative value if not met, and that Hot ones have a positive one. Well, Blue Sky features are likely to disrupt the market and therefore be of even greater value.

So, as you battle with your feature roadmap, what is the status of the features you’re trading off against each other? Are those hygiene features ones which you’ve already satisfied, or ones you’ve failed to satisfy at all? Are they “me too” Standard features, or Hot ones that will only attract your Early Adopters (if you have any)? Or, perhaps, just perhaps, you’ve got a Blue Sky one hidden away in there…

Mister blue sky please tell us why
You had to hide away for so long
Where did we go wrong?